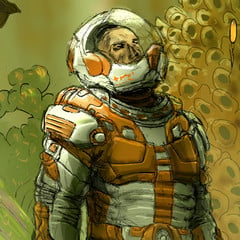 Arthur Haas (1969) is an artist from Amsterdam, the Netherlands. He specializes in landscape painting, environment design and concept art for the entertainment industry. Arthur works as a freelance artist for major Hollywood film studios and international book publishers and sell original artworks online and in galleries.

In 1994, after studying photography for two years, Arthur discovered painting and has been teaching himself the craft ever since. He's had several successful exhibitions in Amsterdam. Since 2000 Arthur combines digital and traditional painting. Since 2010 he works as a freelancer.